Following the first-ever BMGA Scottish Open in Aberdeen last Sunday, some of the tournament competitors stayed on at Codonas Aberdeen beach to enjoy the venue and its attractions including the Shooting Shack, Penny Falls, Pool, Rides and Tenpin Bowling.

The competition featured players from England, Scotland, Finland and Gibraltar and was won by London's Brad 'The Fist' Shepherd with a score of 32(-4), setting a new Unofficial BMGA Player Course Record in the process. London's Alan 'Stormin' Norman was runner-up with 36(par), with Luton's 'Squire' Richard Gottfried finishing third with 37(+1). 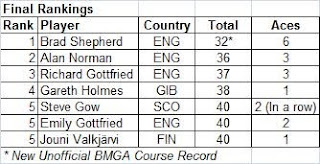 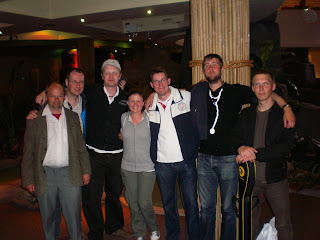 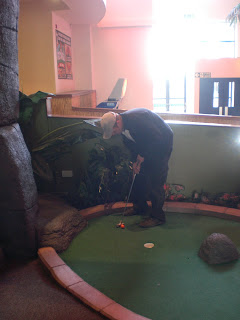 I finished last? how can that be?

it must've been the Tennants!

Where's the blog on the Air hockey? or the bowling?

Perhaps you were a little too refreshed!

Posts and pics on the Air Hockey and Bowling will follow (who won the bowling???). It's been a lovely sunny day today so sunburn takes precedence over blogging!

Oh, you'll also be receiving points on the Irregular Mini Golf Tour for your 5th place in the 'Super League'!