Richard & Emily Gottfried have completed their second season on the British Minigolf Association Tour and they have both risen up the official rankings.

Richard said “Heading into the 2008 Season I had set myself three main Minigolf objectives. To win a tournament on the BMGA Tour, reach the top 20 of the BMGA British Rankings, and play for Great Britain in an overseas tournament. And I was lucky enough to achieve all three by June of this year. Next year I’m planning on winning more individual BMGA Tour events and breaking into the top 5 of the BMGA British Rankings.”

He added “It’s been a very successful year for me with wins in the British Club Championships, Adventure Island/Heart FM Open and the Weymouth Open, and Emily has picked up some good finishes as well.”

He added “I’m now looking forward to having a bit of a break now, but I know I’ll be itching to get back into competition in a few weeks. There will be around 16 tournaments in the calendar next year and hopefully I’ll get to compete in them all.”

After playing in 11 BMGA Tour events Emily finished 46th in the BMGA Order of Merit and 29th in the 2008 BMGA Season-Only Rankings. Highlights of Emily’s season included 3rd place in both the BMGA British Women’s Championships and the Castle Golf Women’s World Crazy Golf Championships and selection for the Great Britain team.

Emily said “This has been a fantastic season, and although each competition was challenging, I know I did my best and a 46th place finish for my first full year is great. I’ve played on some lovely courses in the UK and abroad and I’m looking forward to next season.” 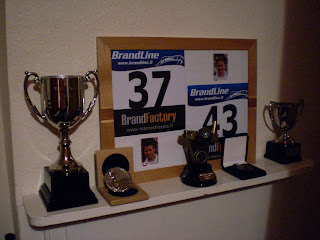