(Luton, 21.12.07) In the battle of the UK's Top Finger Jousters Richard Gottfried held onto his one-year undefeated streak by beating his arch-rival Emily Gottfried 6-2 in Point Play Rules.

The match started well for Richard who scored two quick points by hitting both of Emily's legs, followed by a twisting neck shot for a further two. However, Emily fought back and hit a two-pointer with a questionable 'low chest' shot on Richard to bring her back into the game. But a win for Emily was not on the cards and by planting two well placed shots onto Emily's right leg Richard extended his undefeated streak to 48 wins since 21st December 2006.

Commenting on his well-earned victory Richard said "Emily has proven time and again to be a tough opponent and excellent proponent of the art of Finger Jousting, but I'm on a hot streak at the moment and it won't be long until I am crowned as the Undisputed Worlds Finger Jousting Champion." 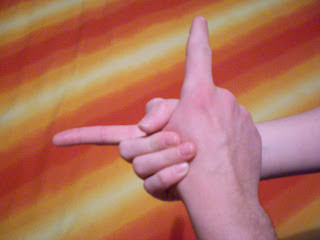