Worm Charming Competition to be held at the World Alternative Games in Llanwrtyd Wells on Sunday 10th August.

Amongst the many sports, games and events on offer at the upcoming World Alternative Games will be a Worm Charming Championship!

Taking place  at the Games in Llanwrtyd Wells, Wales on the morning of the 10th August the Worm Charming Championships ('Pencampwriaethau Hudo Mwydod' in Welsh) will be using the official IFCWAP (International Federation of Charming Worms and Allied Pastimes) rules for the event.

To register to take part in the Welsh Worm Charming Championships, and other events, please visit the World Alternative Games website.

In July 2011 alongside my friend (and champion worm charmer) Oliver 'The Machine' Florence, and my nephew Kallum Harper, I competed in the Worm Charming Competition at St Mary’s Village Carnival in Edlesborough, Buckinghamshire. What an event that was!


The World Alternative Games will be taking place place between Friday 8th and Monday 25th of August 2014 with over 60 interesting sport and recreation events held during the festival of fun and games in Llanwrtyd Wells, Wales.

The official WFJF Finger Jousting World Championships will also be taking place at the 2014 Games, with male and female categories for athletes to compete in on Sunday 10th August.

Check out the events listing and games brochure on the World Alternative Games website.

- Congratulations to Oliver Florence & Team for winning the South of England Earthworm Charming Championships
Posted by Richard Gottfried at Tuesday, July 15, 2014 No comments:

I recently found out about The World Alternative Games 2012 that are taking place in Llanwrtyd Wells, Wales from the 17th of August and the 2nd of September. It sounds brilliant.
The multi-sport event features a number of weird and wacky, bizarre, odd and obscure, fringe sports - some of which I have participated in over the years!
Looking at the website there will be a total of 49 events during the fortnight, including an opening & closing ceremony.
As an avid fan of alternative sports and games I've heard of a fair few of them, but others, like Underwater Rugby, The Mad Shopper and Welsh Crempog Race are new to me!
Some of the sports/championships on offer include the World Bathtubbing Championships, Gravy Wrestling, the International Under Water Hockey Championships, Conkers, Barrel Rolling and a Ditch Race! Of those sports I've heard of there will be events in Worm Charming, Rock Paper Scissors, Pea Shooting and Pooh Sticks.
The World Alternative Games is planned to become a bi-annual event, so if you can't make 2012, there's always 2014. Fingers crossed that Crazy Golf, Thumb Wrestling and Finger Jousting make the schedule in two years time...
Link:
- The World Alternative Games - Brochure
Related Blog Posts:
- Rock Paper Scissors
- Worm Charming
- Behold...
Posted by Richard Gottfried at Tuesday, July 24, 2012 No comments:

While Emily and I were busy revisiting the 'birthplace' of the Crazy World of Minigolf Tour in Southsea in late and playing some new courses too, our Minigolf Rivals and fellow keen odd-sportsmen Oliver Florence, Richard Skeggs and Leamington Spa-based Robert Clarke were competing at the South of England Earthworm Charming Championships - an event they won!

The first South of England heat for the 2012 World Worm Charming Championships was organised by the Blackwater Valley Countryside Trust and saw 16 teams in total battle it out for the Worm Charming Title.

Back in July, one week after the 2011 World Worm Charming Championships that Ollie, Richard and Leamington Spa-based Robert Clarke had competed in, we took part in the Worm Charming Competition at St Mary’s Village Carnival in Edlesborough and finished in tied third place.

Photo: The team of Ollie, me (as a Chicken) and Kallum at the Worm Charming Competition at St Mary’s Village Carnival in Edlesborough

Making our debut in a Worm Charming Contest alongside a Worlds Championship Competitor.

On Saturday 2nd July 2011 fellow Minigolfer and Blogger Oliver 'The Machine' Florence invited me to the St Mary's Village Carnival in Edlesborough to compete in their annual Worm Charming Competition. With Florence having competed in last week's World Worm Charming Championships in Cheshire it would have been rude and quite silly to turn down such an offer, so off we headed. 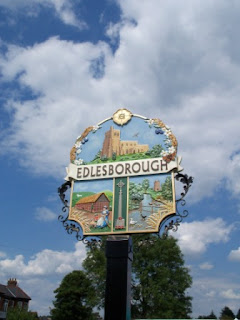 With Emily and I living a mere 11 miles from the village of Edlesborough (which lies in Buckinghamshire, rather than Bedfordshire as I thought), and with our nephew Kallum (a keen bug hunter) staying with us for the weekend, we arrived a good hour or so before the Walton-on-Thames based Ollie, so had a good look around the Fete/Carnival (Fetarnival?) and had a go on a lot of the games and stalls. When the announcements for the Worm Charming were being made we headed straight to the MC - St Mary's Village Carnival chairman Gordon Gray - to nab a Plot. We drew number 68.

It wasn't "the worlds" but the Worm Charming Competition at Edlesborough Carnival was brilliant fun. All 20 minutes of it. 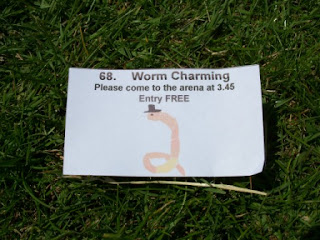 Once Ollie arrived our team of Freebooters posed for a team photograph at our Plot. 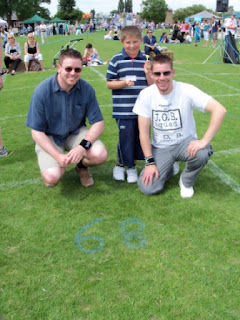 And then after giving the Plot a liberal dousing of water before the off, we got underway with our Worm Charming.

With the skill and experience of one-third of the 112th Ranked Worm Charming Team in the World we began using a mixture of techniques including 'simulating the movement of a mole' using a Garden Fork, beating the ground using small bits of wood - one of which was the leg off of a small coffee table - and dressing like a Chicken. Fellow Minigolf Pro Richard 'Michael Skaggs' Skeggs, a member of Ollie's team, had dressed like a Fox in the Worlds, and with the thinking that 'the early bird gets the worm' was worth a shot. It didn't work.

Video of the team in action.

Despite our best efforts, professional equipment, enthusiasm and Chicken costume we finished in tied third place in the 12 team competition. The winners were a group of four girls who managed to get two worms. The runners-up were a team of children in Plot 67 who got one worm, which was the biggest of the three worms caught. Everyone else got none.

As an aside, Kallum became possibly the first person injured in a Worm Charming Contest! With the St John Ambulance medics being pressed into service after he either got bit by a Red Ant (we did find loads of them in our plot), or was stang off of a Wasp while fetching some water for us. This meant that for part of the 20 minute competition we were down to two players, as when Kallum returned from the First Aid Tent he decided to play his Catch a Mouse game he had won on a Tombola.

When we got home Kallum managed to 'Charm' loads of worms in our back garden!? A text from Ollie in the evening confirmed that conditions had been less than ideal in Buckinghamshire, as he'd managed to get a worm out of the ground in his garden in under a minute once he'd got home! 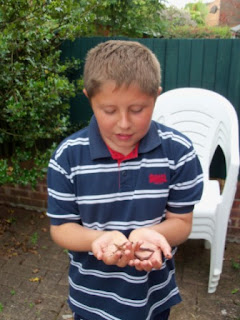 The St Mary's Village Carnival has a different theme each year, with 2011 being 'Pirates'. Driving into Edlesborough via Eaton Bray you could see that the villages had gone to great lengths to decorate houses, pubs and shops in the area. The event itself also saw many people dressed up as Pirates. As Freebooters from lands near and far, me, Kallum and Ollie wore Skull & Crossbones Wristbands while we were Worm Charming.

Some examples of the Pirate decorated houses are below, along with some more snaps of the Carnival itself. 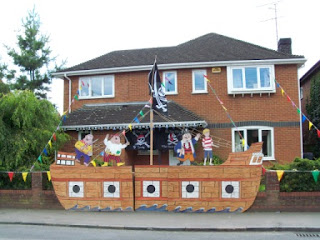 A Pirate Ship with its cannon aimed at passers-by! 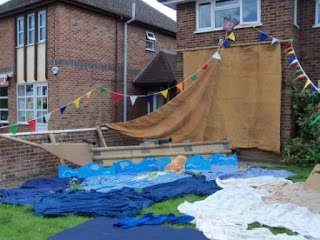 One house allowed you to vote for your favourite type of Pirate! 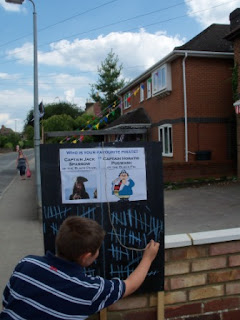 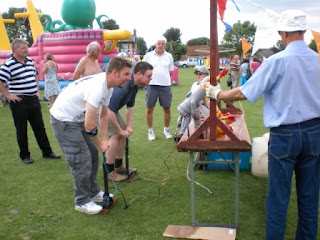 I didn't dress as a Chicken for this game 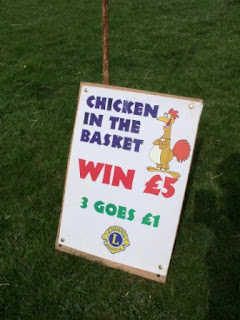 The man stands watch over the basket, a dangerous position indeed! 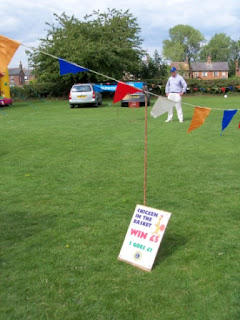 Video of me and Ollie playing the Chicken in a Basket game.

Kallum on the Crockery Shy 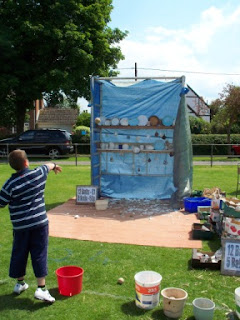 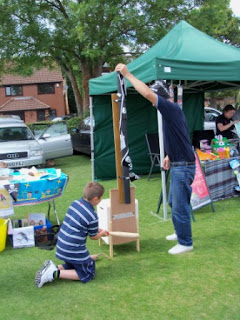 Kallum lobs a wet sponge at me! 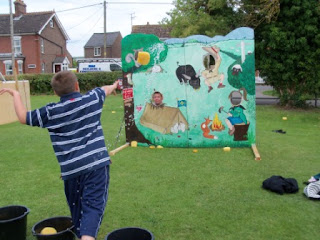 I missed spectating at the Cow Pat Bingo as I was putting the Chicken costume back in the car, but was told the event did not involve a real Cow!?

Unfortunately we all missed the much hyped "sausage eating contest for dogs and their owners" that had been mentioned in the Dunstable Today news story "Hidden treasures at village carnival carnival!" - what a spectator sport that would have been!

Oliver Florence's account of the day (and his report of the 2011 World Worm Charming Championships)
Posted by Richard Gottfried at Wednesday, July 06, 2011 No comments: