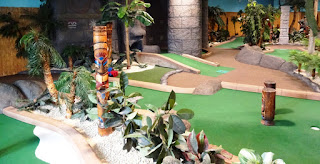 We recently revisited Adventure Island Mini Golf at Star City in Birmingham and found the courses have had some new obstacles added on a few of the holes.


There are also some new additions to the theming on the Hidden Cove Challenge and Lost Hut Trail courses.

Adventure Island Mini Golf has two 18-hole indoor courses and they were the 57th and 58th courses played on the Crazy World of Minigolf Tour back in 2008. We've been back a lot since then - I won the Adventure Island/Heart FM Open competition there, returning for the weekly Monday-night league where I was runner-up to three-times World Champion Chris Harding, and I was the co-course record holder with a score of 28(-8) on the Lost Hut Trail.

You can find the course at the Star City leisure and entertainment complex at Adventure Island Mini Golf, Units 20/21, Star City, Watson Road, Birmingham, B7 5SB.