My prizes from the 'Guess the Number of Golf Balls Captain Jack Frost Fired at the Fort' Contest were three pin badges and a t-shirt. Some more great Minigolf items for my collection! 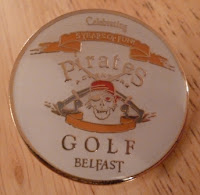 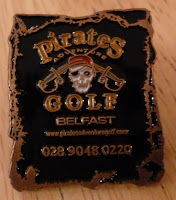 Back in August 2010 Emily and I visited and played at Pirates Adventure Golf. There are two 18-hole Adventure Golf courses there - Blackbeard's Adventure and The Captain's Challenge - and they became the 188th and 189th courses we played on our Crazy World of Minigolf Tour. Very good fun and testing courses they are too. While in Northern Ireland we played a Minigolf Challenge Tournament (the NIBBAL-IT) against Northern Ireland's top Minigolfers - Mark 'The Horse Whisperer' Swain and Craig 'Kamikaze' McCallister, with the Bangor Minigolf Club members winning the contest.

The courses have played host to two British Minigolf Association tournaments when Pirates Adventure Golf was the venue for the BMGA Irish Open in 2006 and 2007.