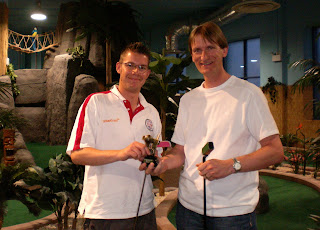 On Tuesday 17th June Luton Minigolfer Richard Gottfried was invited to take part in the Adventure Island/Heart FM Open at the new 36-hole Indoor Adventure Minigolf Complex at Star City, Birmingham, as it played host to its first Minigolf Tournament.

In the competition both players had achieved scores of 35, with Harding setting a new course record on the Lost Hut Trail course, and Gottfried equalling the course record on the Hidden Cove Challenge course. Course owner John Whitehead presided over the tournament and decided that a play-off at the tricky 8th hole on the Hidden Cove Challenge course would decide the trophy winner.

However, after three attempts to win the hole both players were still even and so the play-off moved to the 8th hole on the Lost Hut Trail course. Here Harding played first and recorded a score of 3, which proved to be one stroke too many as Gottfried stepped up and holed out in 2 shots to take the play-off victory.

Richard Gottfried said, “It’s great to get a tournament win, and the play-off was very tense. The Adventure Island course at Star City is a top course and good fun to play, there are also some very tricky holes and I am looking forward to returning for more tournaments in the future.”