A trip to High Wycombe

Q. How interesting can furniture be? 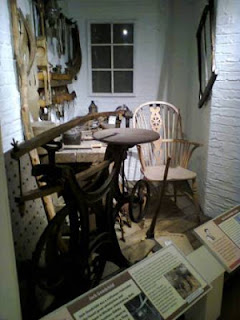 Ahead of visiting a friend’s housewarming party in High Wycombe I asked her what else was interesting, or a ‘must see’ when in the town. She said that amongst the good shopping on offer and nice walks (if the weather is nice) that there is a Chair Museum. She said that the Buckinghamshire town is famous for its chair making, much like Luton is renowned for its hat making tradition.

Checking online for details of the museums and also on twitter to see if they had a presence I also found out a number of other people talking about the High Wycombe Chair Museums, most notably via the Crap Towns* twitter feed (linking from a blog post), and the book’s author Sam Jordison who was keen to hear all about it. 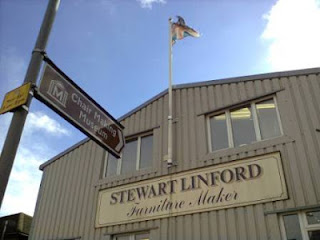 On our arrival we spotted another brown sign advertising the museum and a nicely crafted door. 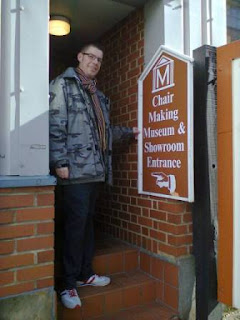 On entering the showroom for Stewart Linford Furniture Maker and museum upstairs we were welcomed by the ‘curator’ Tom who was intrigued by our story of how we had found out about the museum.

He let us know that if we wanted the full tour of the Chair Making Workshop it would be £6 each, but he was happy to give us some background information about Chair Making and also a variety of chairs in the showroom – including the Winston Churchill chair (with secret compartment) and a one-of-a-kind anthropomorphic rocking chair!

We also found out why chairs have an H-frame and why a top hat should be kept top-side down. Intriguing stuff.

The Chair Making Museum is open seven days a week and we were advised to book ahead and perhaps visit on a weekday to get the full experience.

Ironically in the road right next door to the museum was an old chair, upturned and used to block a drain!? 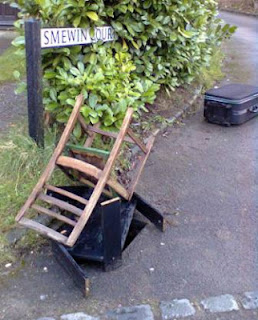 After a break wandering around the town we headed to the town’s main museum. This is in Castle Hill House on Priory Avenue and very close to the town’s railway station.

The museum had some fascinating exhibits about the chair making industry, the people involved in it and the town itself. 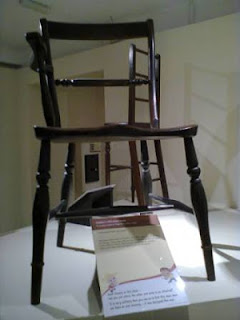 There was also an excellent sporting exhibit (running until the 8th of September 2013) on the town’s football team – Wycombe Wanderers (aka Chair Boys) - to celebrate its 125th anniversary. Fellow Minigolfer, Bar Billiardist and Skittler Marc ‘The Roller’ Bazeley was also due in the town to report on the Wycombe Wanderers F.C. versus Northampton Town F.C. but the game was postponed due to a waterlogged pitch.

Amongst the displays, information and trophy cabinets there were interactive elements, including a table football game (Emily beat me in the best of 3-points game and I won 3-2 overall) and a penalty shootout game which I won 2-nil, although Emily made the save of the match by using her face!

The High Wycombe Museum and Gardens are well worth a visit if you’re in the town, it really was a very well maintained and interesting set-up and gave me some good inspiration for the Crazy Golf Museum. 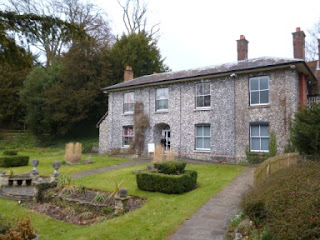 We had a great day out in High Wycombe and there was plenty to see and do, though no Coeliac-friendly places to dine out gluten and wheat free (a real shame). We’ll be heading back again to visit the Hell Fire Caves which we spotted advertised on a Brown Tourist Sign on the drive in.

* My home town of Luton, Bedfordshire won the title of ‘Crap Town’ in 2004 (beating the likes of Windsor and Sunderland and 47 other UK towns) and I recently found out that in winning the ‘honour’ the town was NOT bestowed with a plaque or trophy of some sort! Hopefully the next winner, wherever it may be is given something tangible to mark the distinction.
Posted by Richard Gottfried at Sunday, March 17, 2013

Our Introduction to High Wycombe and its chair museum was great (apart from the weather)!

Looking forward to re-visiting in the summer!