"WHITMAN, PRICE, AND HADDAD!!! You remember them! There they are now, BASKING under the Maui sun."

According to Damon Killian, host of "The Running Man," Whitman, Price, and Haddad are "last seasons winners" of the Running Man gameshow. According to the bounty hunter named Fireball, played by ex-NFL running back and Hall of Famer Jim Brown, Whitman, Price, and Haddad are "last season's losers." Regardless, these three contestants are found dead and severely burned by Maria Conchita Alonzo in the musky bosom of the gameshow's playing ground. 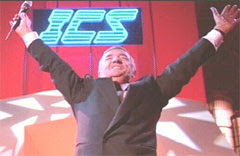