Bagatelle at the Hyndburn Heritage Museum in Accrington

Spotting a Bagatelle display at the Hyndburn Heritage Museum in the Accrington Arndale. 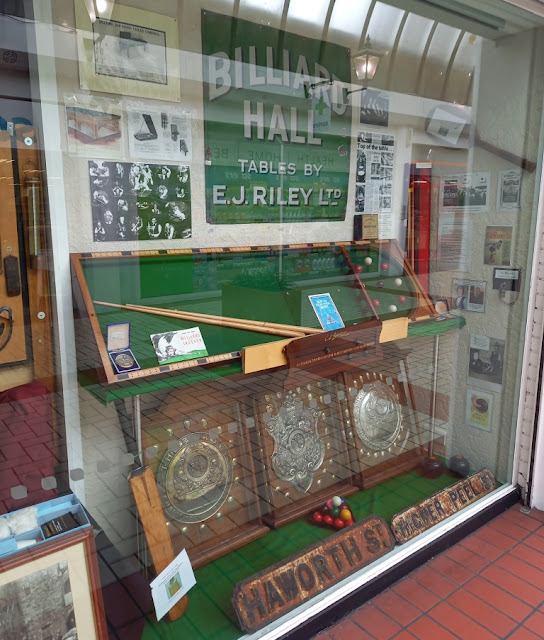 We spotted this Bagatelle table on display in the window of the Hyndburn Heritage Museum while walking through the Accrington Arndale. 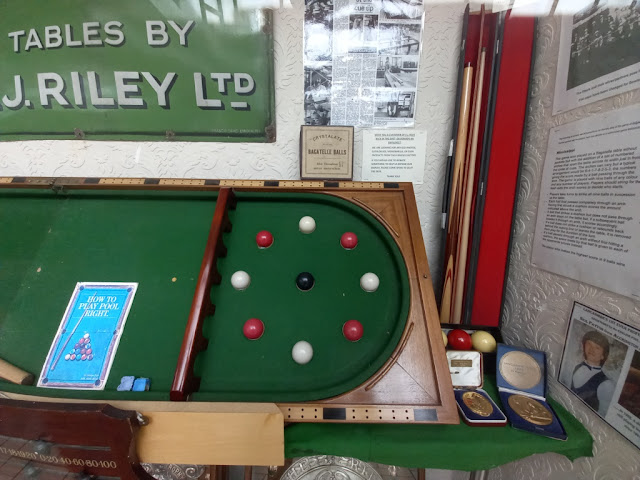 It's a pretty rare game and not really played much anymore. Most tables are to be found in Chester. 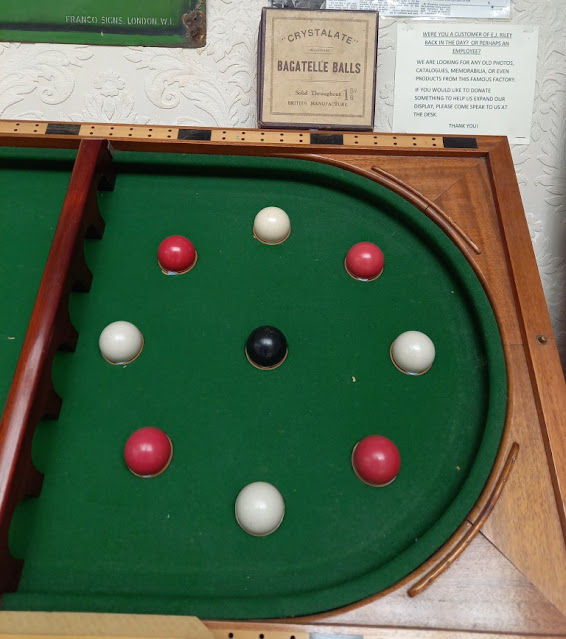 We've played Bagatelle once before, at the Union Vaults pub in Chester back in 2016.
One of our favourite pub games is Bar Billiards and the rules of that game can appear complicated to a newcomer. Bagatelle is no different in that respect. However, while the cue, table and green baize ball games may also appear to be similar in appearance, looks can be deceiving.

Posted by Richard Gottfried at Tuesday, October 05, 2021 No comments:

A revisit to the Crazy Golf course at Vickersway Park in Northwich, Cheshire. 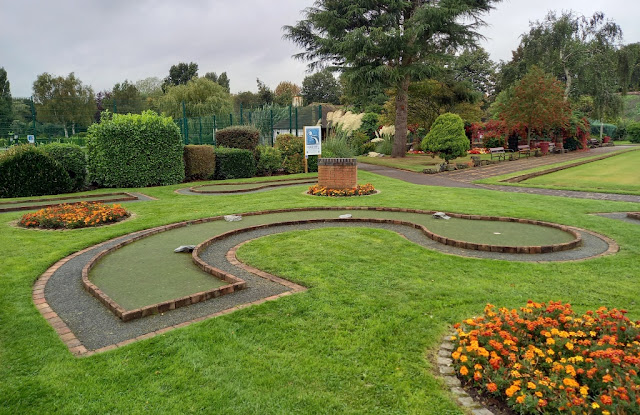 We were in Northwich at the weekend and while there had to swing by the Crazy Golf course at Vickersway Park. 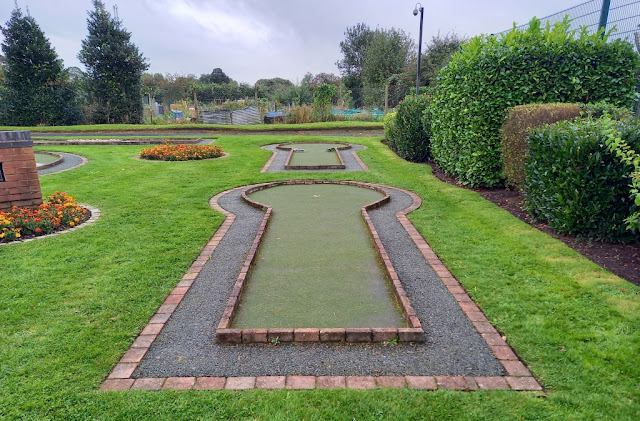 The 9-hole layout was the 700th course overall we visited on our Crazy World of Minigolf Tour back in September 2016. We returned in January last year - it was one of the last courses we visited before the pandemic hit!
We've now been to 973 courses on our minigolfing travels since September 2006. 934 of them have been in the British Isles. 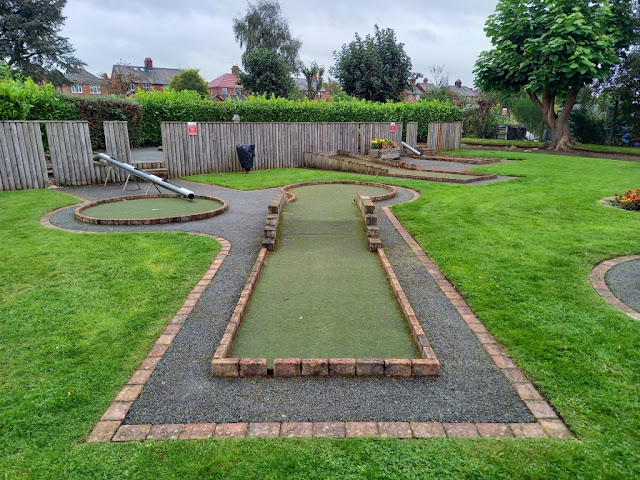 Vickersway Park in Northwich is a very pleasant spot and lovely for a wander.
Vickersway Park is also home to nice grass Putting Course.
Posted by Richard Gottfried at Monday, October 04, 2021 No comments:

A look at the social distancing signs at the SEA LIFE centre in Blackpool. 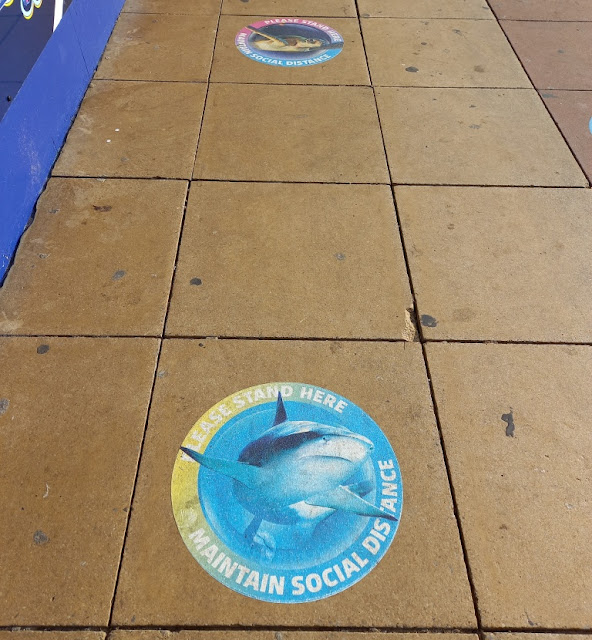 I spotted these nice social distancing signs outside the SEA LIFE centre on the promenade in Blackpool on my trip to the seaside town last month. 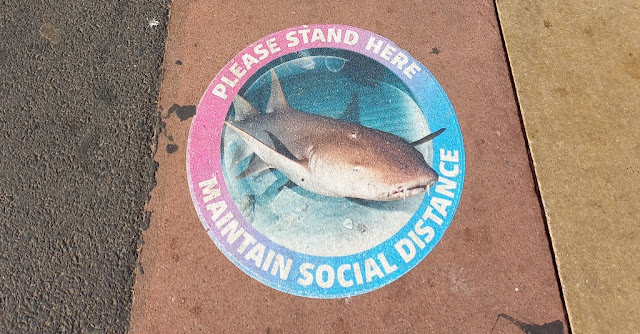 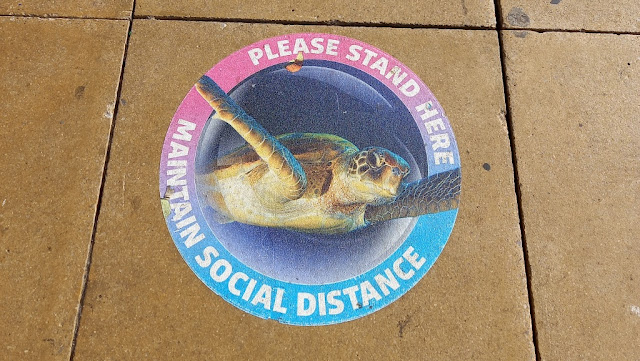 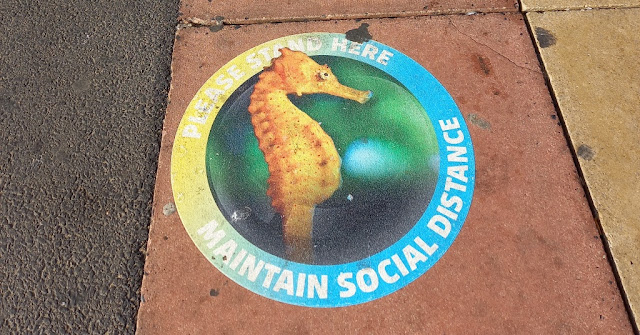 I've been documenting all of the Covid-19 signs I've seen during the pandemic on my Instagram account and here on the blog.

Posted by Richard Gottfried at Monday, October 04, 2021 No comments:

Spotted at a pub in Northwich, Cheshire today.

Posted by Richard Gottfried at Sunday, October 03, 2021 No comments:

InterTan is still around... 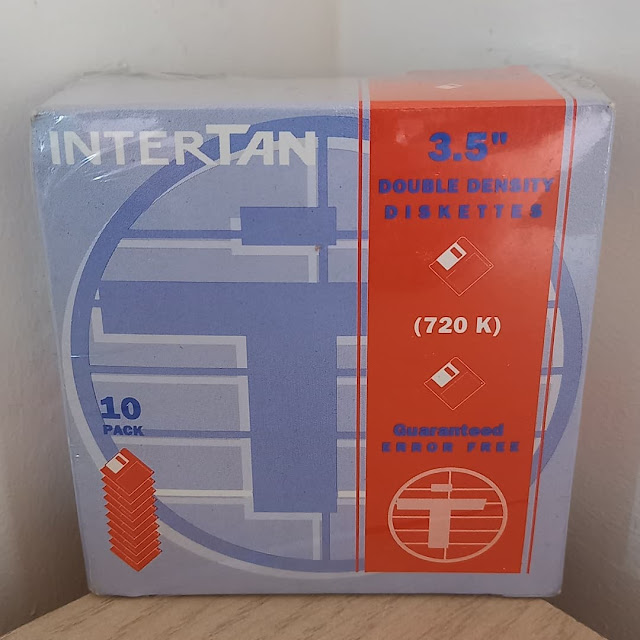 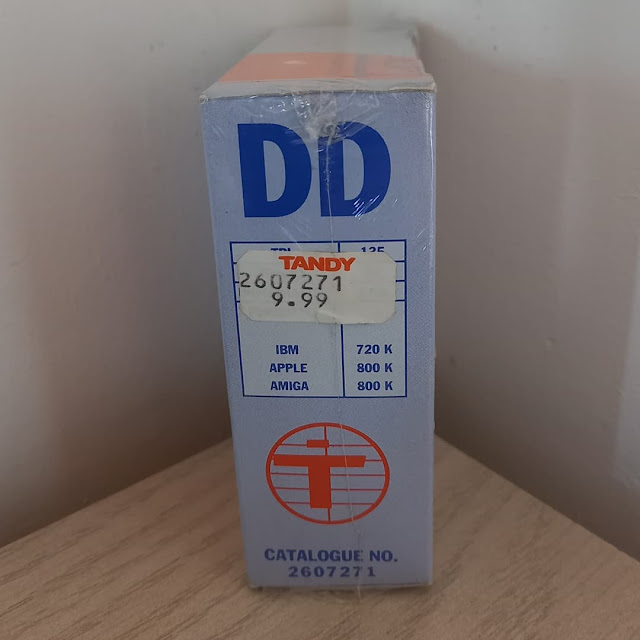 My first job was at a Tandy franchise shop in my hometown back in the 1990s. 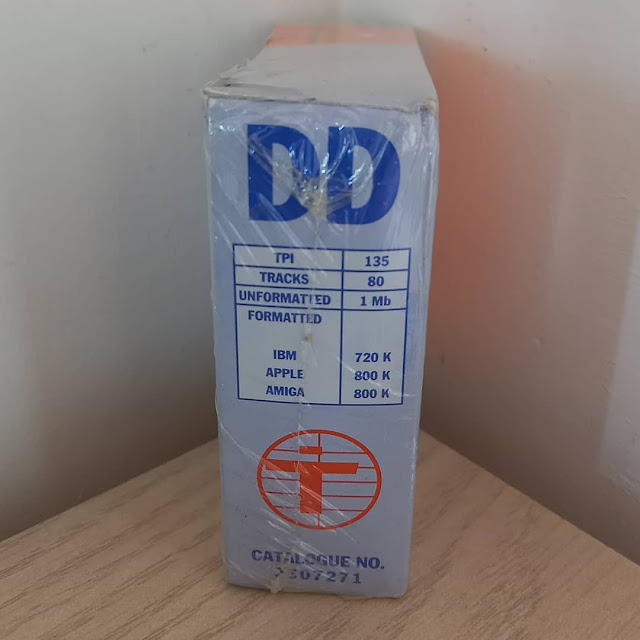 A look at Graffiti Golf in Blackpool (September 2021). 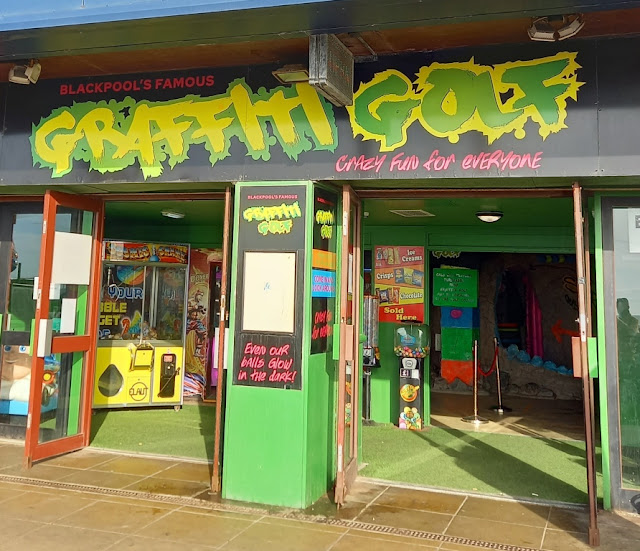 We first played there back in 2009 when it was a Pirate Adventure Golf course. It was the 151st played on our Crazy World of Minigolf Tour. Since then the venue has changed hands and look a couple of times. We played the Graffiti Golf version of the layout in August 2018 and swung by in May this year. 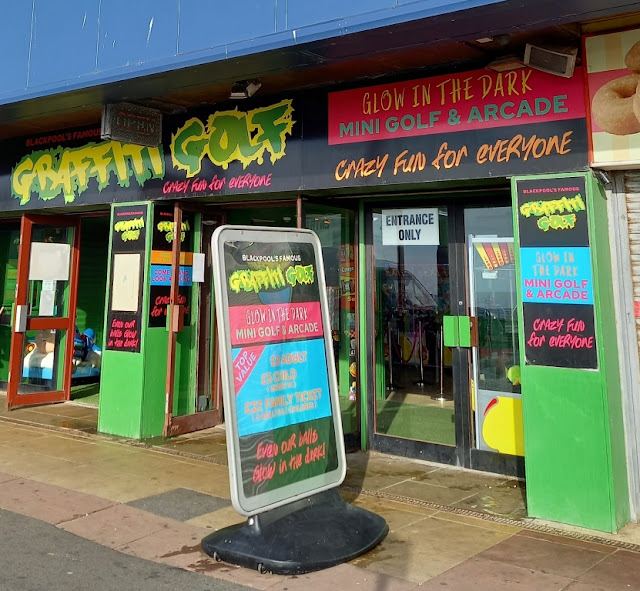 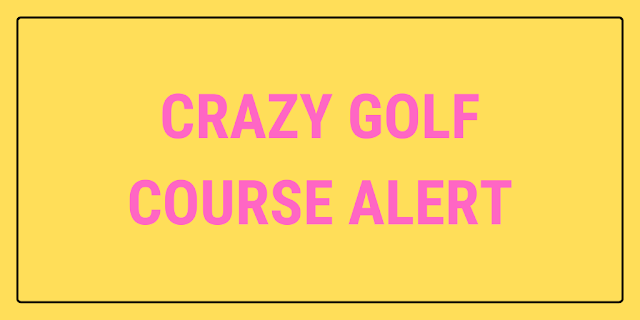 The new 9-hole indoor Crazy Golf course has been created by the team at Putt Club.
Putt Club London Edmonton joins other Putt Club courses in Hull, Watford and London Docklands. A new location is opening in Leicester in November 2021.

There has been a real boom in minigolf courses opening in London. When we worked in the city there were very few options for minigolfing, but a number of new indoor, late night competitive socialising style venues have opened in London over the last seven years.

Before the coronavirus pandemic the phrase 'competitive socialising' had become a popular way to describe going out and having fun, with a number of new businesses catering to the demand of a public who wanted to compete at something while eating and drinking in a nice setting.
Whether it was table tennis, darts, shuffleboard, bingo, tenpin bowling, arcade games, or our personal favourite crazy golf, people were finding new ways to quench their thirst, have fun and compete without signing-up to a full sports league or taking things too seriously.

Minigolf has grown in popularity in the last nine years and has moved from being seen as a traditional outdoor seaside summer activity to become a year-round game that can be played indoors, outdoors and at pretty much any time of the day.
A number of high streets, retail parks and shopping malls are now home to minigolf courses, with more new venues planned to open.

We've played minigolf in London a number of times on our Crazy World of Minigolf Tour over the last 15 years. We're looking forward to a return visit to the capital for a few rounds in the future.
Posted by Richard Gottfried at Friday, October 01, 2021 No comments:

Today is International Coffee Day so I thought it was the ideal day to post about two Dunkin' locations we've seen in Manchester over recent months.
It's always interesting seeing new, different and 'exotic' brands popping up on the high street.

The first Dunkin' branch to open in Manchester was this one on Deansgate in the city centre. We knew the brand had launched in the UK and had a wander past on a trip to town in May. At that point the brand had 12 locations in the UK.
The second one we saw surprised us as we didn't know it had opened on Piccadilly. We noticed this one in July.
There is now a third location in Manchester. It's at the Fort Shopping Park in Cheetham Hill.

Dunkin' in the UK

Dunkin' has a total of 16 UK locations at present. As well as the Manchester sites there are Dunkin' branches in Bury, Sheffield, Liverpool, Barnsley, Bradford, Doncaster, Rotherham, Nottingham and London.
The London Dunkin' is the sole location south of Nottingham!

A new motorsport-themed Crazy Golf course is opening in Leicester in November. 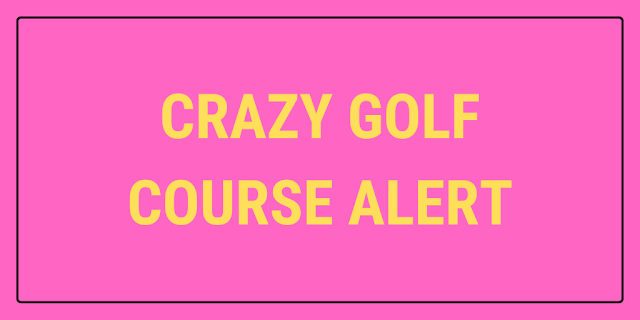 Leicester will soon be home to a new indoor Crazy Golf course as the team from Putt Club are opening a venue in the city on the 6th November.
Putt Club Leicester joins other Putt Club courses in Hull, Watford, London Docklands and the newly opened London Edmonton location.

There has been a real boom in minigolf courses opening in Leicester, with the new Putt Club joining Treetop Adventure Golf and Caddyshackers in the city centre. The wider Leicestershire area is home to a number of other courses too.

Minigolf has grown in popularity in the last nine years and has moved from being seen as a traditional outdoor seaside summer activity to become a year-round game that can be played indoors, outdoors and at pretty much any time of the day.
A number of high streets, retail parks and shopping malls are now home to minigolf courses, with more new venues planned to open.

We've played minigolf in Leicester and Leicestershire a number of times on our Crazy World of Minigolf Tour over the last 15 years. We're looking forward to a return visit in the future.
Posted by Richard Gottfried at Friday, October 01, 2021 No comments:

15 years of our Crazy World of Minigolf Tour

Celebrating a decade and a half of our minigolf adventures.

We played the Victory Trail course at Treasure Island Adventure Golf in Southsea, Hampshire on this day in 2006. 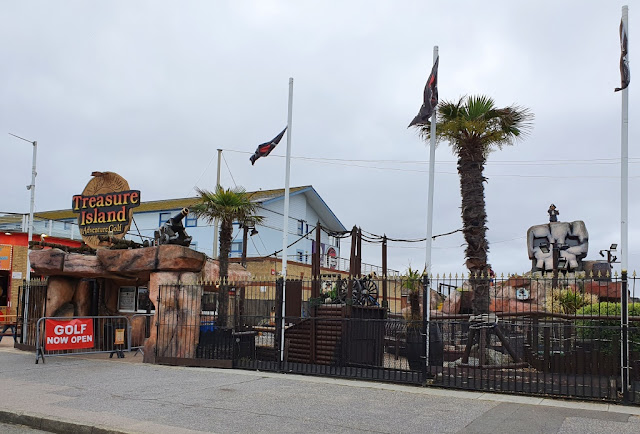 At the end of our 9-hole round on Saturday 30th September I won a free game by firing the cannon on the lucky last hole. 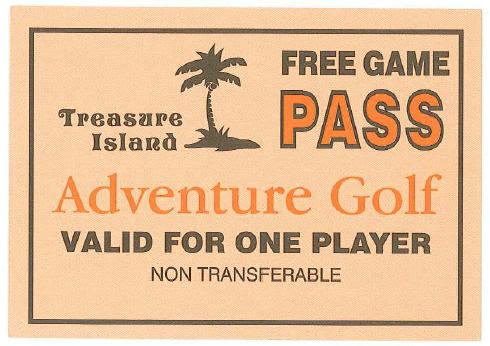 We've been putting on our miniature golfing adventures ever since! 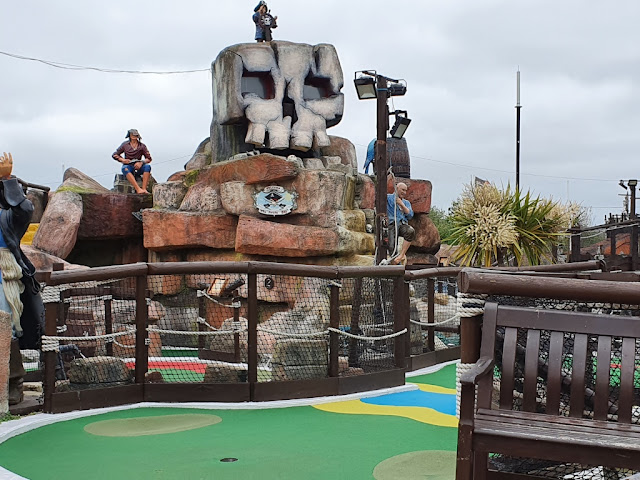 Emily swung by Treasure Island Adventure Golf in Southsea again on the way back from her trip to the Isle of Wight during the summer.
When our travels began in 2006 there were around 600 courses in the UK. There are now more than 1,000, with new courses opening all the time.
We've been to 973 courses overall in the last 15 years, with 934 of those courses in the British Isles.

You can see all of the courses we've visited on our Crazy World of Minigolf Tour post.

Posted by Richard Gottfried at Thursday, September 30, 2021 No comments:

Playing the Crazier Golf course at Boom: Battle Bar in the Castle Quarter shopping and entertainment centre in Norwich, Norfolk. 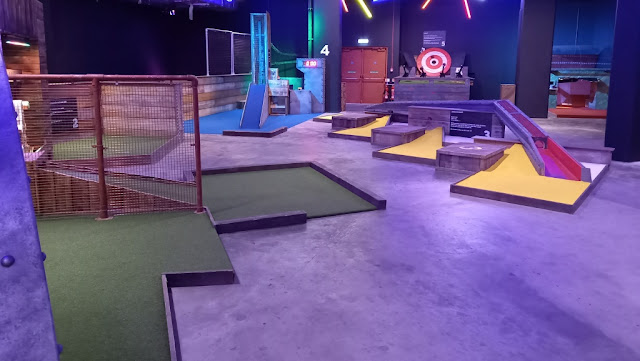 We stayed in Norwich for part of our East Anglian road-trip last month and the second miniature golf course we played was the Crazier Golf layout at the first Boom: Battle Bar location in the Castle Quarter shopping and entertainment venue in the city centre. 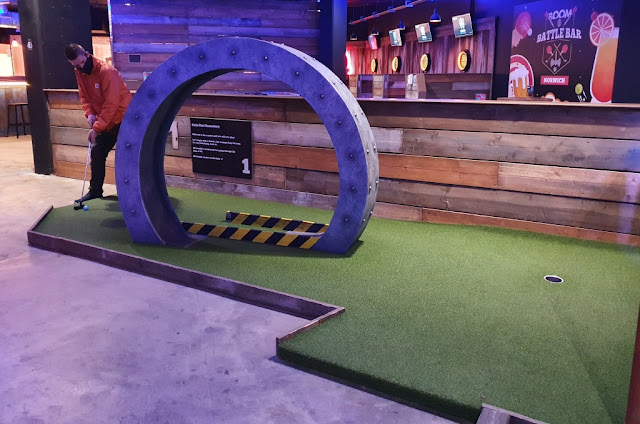 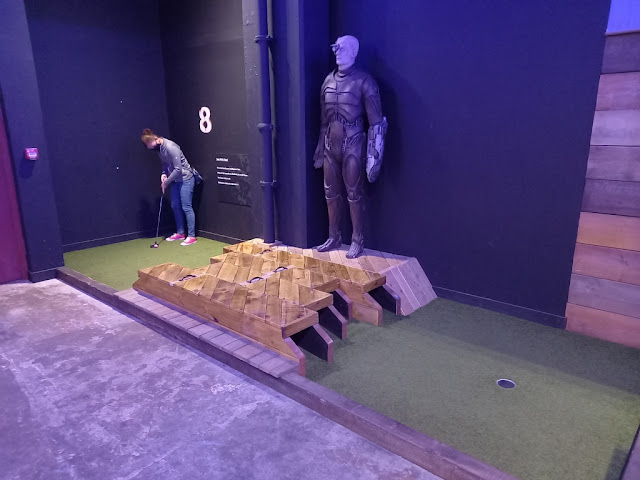 The 9-hole course differs from 'standard' crazy golf courses as not all of the holes require the use of your putter and ball! Some of the obstacles require you to pump the ball, or launch it, via another mechanism. There's also a timed hole which is fun to play. 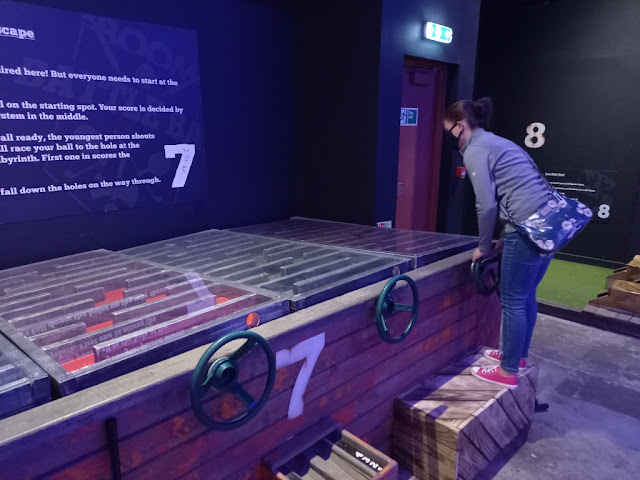 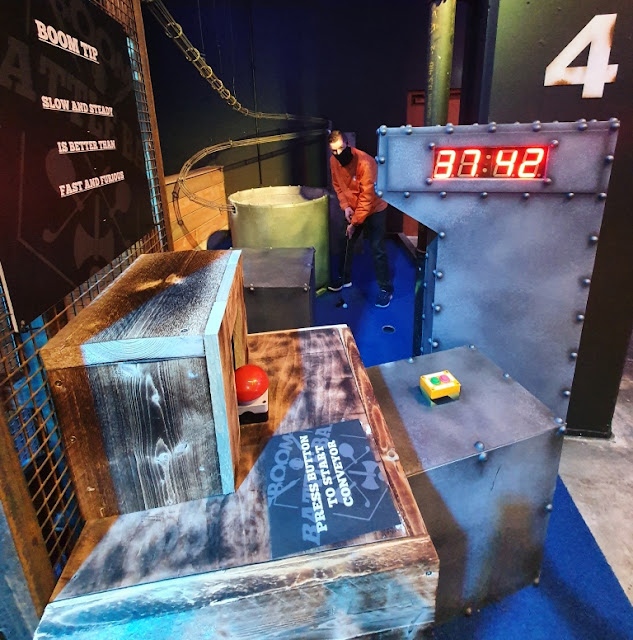 Our match-up was close and I picked up the win by one-shot with a 23-24 scoreline. Working out the scores was interesting as the holes don't necessarily have a stroke score - on the 4th I took 37:42 to play out the hole, while Emily took 46:08. On the 7th and 9th we had to race each other to figure out our points score! 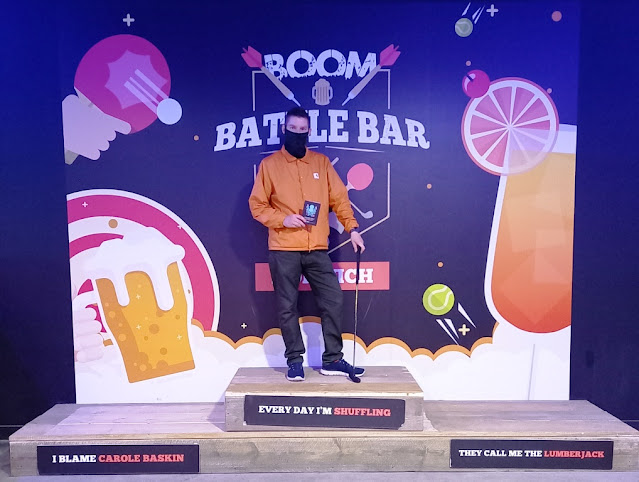 
Check out the Boom: Battle Bar website for more information. 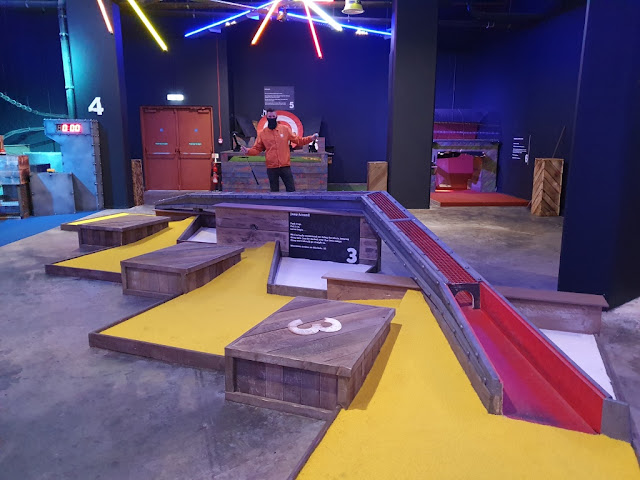 The Crazier Golf course at Boom: Battle Bar in Norwich was the 970th course Emily and I visited on our Crazy World of Minigolf Tour. Combining the courses we've visited with those that my brother Christopher - a founding member of the tour - has too it was the 1,000th course we've been to overall!
---------

Posted by Richard Gottfried at Wednesday, September 29, 2021 No comments: